Who makes them? Thanks

I have Aluminum ones.
I hope when you say recycle you aren't putting the stuff from the catch tank back in your engine!

I’ve seen pics of a system that has vent lines to it that has some kind of screen in it to separate the oil from the air and gasses then the oil is returned to the block and the air goes out a filter or another line to another catch can.

Yep, mounted high on the engine, then typically returns to the front oil drain plug.
This is commonly used in limited modified flatheads and big opens so they don't blow all the oil out of the breather.
I'm sure it would work on a small block animal open as well. -- Generally you don't push much oil out of ohv engines since the vent is so high to begin with - but you could certainly use one if that's a problem, sure.
You can make one yourself easily enough. Catch can with air filter and a mounting bracket to a location higher than the vent on the block -- return line from the bottom of the can to the front oil drain plug. I can sell you one if you really need, but most folks just make their own.

Yep that’s what I was looking at. 3” small block and keep pushing oil out crank seal flywheel side. Added vents to side cover above cam and pushes oil out them and crank seal. Maybe something with ring not sealing good. But crank seal never held that well from the start.

So you want to put "oil" or what ever is in your catch can back in the crankcase?
Please tell me what a piece of screen is going to do to remove methanol, water, acid or what ever other crap ends up in your catch can.
If it was me i would fix the real problem.
I'd figure out why i was getting all this liquid in the catch can.
Some reasons could be but not limited to:
Bad seal.
Worn crank
Loose bearings
Loose piston
Loose rings
Fat carb
You are putting too much oil in the engine to begin with
Wrong plumbing (i see this all the time, even on engines from other "engine builders"

I recently had a big block open that was pushing oil out the FW side seal.
This engine originally had a factory bushing rather rather than a ball bearing on the FW side.
I tried 2 new seals with out success.
I tried a new bushing with out success.
A new crank probably would have fixed it.
This crank was worn very slightly on the FW side but it had so much other work done to it previously that i didn't want to spend the customers money on a new crank and go through all the modifications and spend more of his money.
What i did:
I machined the crank down a couple of thousands to get it perfectly round again and made a new bushing for the block with the correct clearance.
I was really surprised that .001" difference in clearance solved the problem.
I have had other engines with more clearance than this one had but didn't have an oil leakage problem.
Live and learn.
"Life is like a box of chocolates" Tom hanks

I'd suggest you take all those hoses ( that i think you have) off the side cover that pump copious amounts of oil into your catch can and install this:
You can choose from the Briggs version or mine.
http://www.fastermotors.net/Breathersystem.html
Oh yea, if you took the baffle out of the valve cover put it back in.

Like I said could be the rings, maybe even the crank. Just saw a few of these system and asked about them. Many other things could be the real problem. About the screen. I have a 250 tag engine that has a breather system like that. But it’s a dry sump system. Just wanted info on ones I have seen.

Jimbo. Jr block, arc crank, jr piston & rod. Your billet head (awesome head by the way) and a breath system like yours that I made. Stock rocker arm cover with baffle only larger hole for breather.

Which hole in the breather did you make larger?
The stock valve cover works up to a point but at high RPMs it can't keep up.
I have a billet valve cover that solves that issue.
Can you send me a couple pictures of your engine and valve cover showing all the plumbing.
My email is fastermotors4@gmail.com
Or text them to me at 920-207-9180

I'm wondering if the 3 button head screws in the flange are too long.
If they bottom out they could act like a puller and over time cause the flange to break off.
It's impossible to know without having the parts in my hands but:
It could be repaired by welding or you might even be able to simply drill and tap the 3 holes deeper.
First drill the holes in the outer portion larger for clearance and simply screw it back on to the block.
Coat the two pieces with silicone sealer before assembly.
You could also machine the flange on the block flat and make a new outer piece (bigger and stronger) and bolt that to the block. 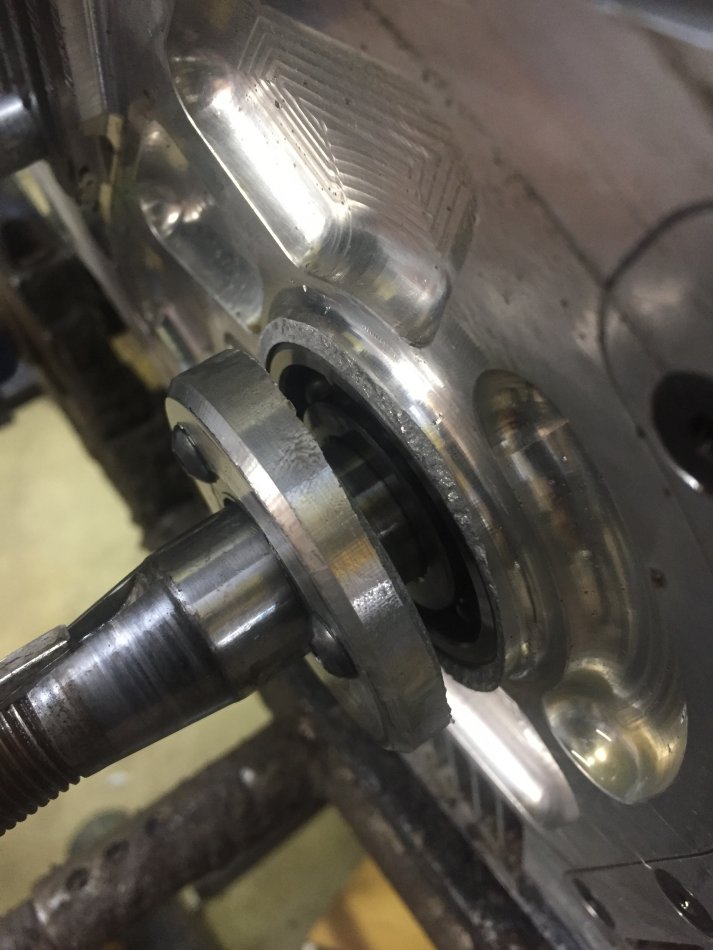 That will require welding . Keeping the seal concentric will be the biggest problem .

Welding does not guarantee that it will be concentric. In fact things often move from their intended position from the way the heat is applied and welded.
It's a simple lathe project to make a new piece after milling the block surface flat again.
To assure concentricity make the new piece fits the crank with minimal clearance.
With the crank installed attach the new piece to the block. Weld it of bolt it.
You can then either put it in the milling machine and bore it to the correct sizes for proper crank clearance and also the seal pocket.
Or you can put it back in the lathe and do it that way.
T

RacerTB said:
Like I said could be the rings, maybe even the crank. Just saw a few of these system and asked about them. Many other things could be the real problem. About the screen. I have a 250 tag engine that has a breather system like that. But it’s a dry sump system. Just wanted info on ones I have seen.
Click to expand...

The bolts didn’t bottom. Looking into some fixes. Winter project now. One thing don’t understand is why machine so thin? It’s not like it had to be for clearance. Oh well they made it that way, it broke. No crying over spilled milk. It’s a race engine. Like I said winter project now.

Thanks. Have to look him up when we get it back together. Back burner now. Don’t think crank case pressure was ever the problem though. Looks like bottom side been cracked for some time.

The breather bypass isn't rocket science. Here's the Briggs version.
I also make my own that is more robust
I also have a billet valve cover with carbon fiber valving. 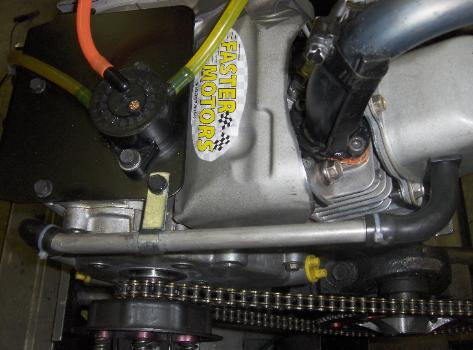