An issue regarding tires on a vintage kart.

The kart I have was professionally engineered around and under a vintage Rupp corvette body, was built in the late 60's / early 70's. It was meant to go down dragstrips and at were at one time somewhat popular. It is powered primarily by a peroxide and 3 other liquids rocket motor. They were somewhat popular back in the day, but some had a tendency to go airborn and into the stands at around 170 mph in the 1/4 mile. The ones who made it, and nearly all of them did, usually ran over 200 mph. They had no more of a fatality rate then dragsters. Some of the builders were not big on spoilers and airdams back then to keep them on the ground. Ok, so the NHRA said no more 1/4 runs for these and they were starting to think that these should be allowed, so they got restricted to the 1/8 mile. The problem was that even so, they also had a tendency to "blow up on the pad", in other words, at the starting line, blowing the crew and driver to bits and sending them and kart parts all around them and into the stands, making them puke and threaten to harass the NHRA with cheap lawyers. So the NHRA said no more rocket powered karts at all, goodbye, have your fun and get blown up somewhere else. The thing was that it was only a few of the karts that made the others look bad. The maker of the most popular rocket motors on these karts got thrown into prison, and, if you ask me, was a little overblown. My attitude was "lets not argue and bicker about what killed who", etc. This is racing.

So, I ended up with the kart. I updated it a little with a magnesium steering wheel from a vintage fighter jet and a real carbon fiber seat. Both of the rear tires had separated on the edges on the tail end of the run and were obviously not meant for those kinds of speeds. I think he had a close call and his wife made him get rid of it but that is just a guess.. My question is that does anyone know a source for small hi-speed tires. The specific size is 11.0 x 6.5 on a 5 inch wheel, otherwise put on the tire sidewall as a 6.5/11.0-5.

The problem I am having is finding that exact size because it was a size made for the old days and not current anymore. Although they can be found on ebay from time to time individually, I have yet to find a matching manufacturer new pair with the same compounds. Plus meant for high speeds. Racing slicks obviously.

If anyone has a source for such tires, it would be a big help to me and I will mention you in my will. I swear it. 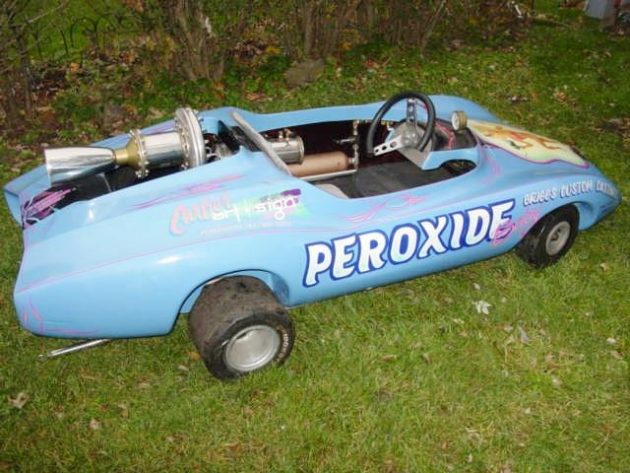 the story itself is insane.... if you plan to run that thing anywhere near 100 mph you got a set to rival bulls... that’s nuts. No pun intended.

I remember these
Google "turbonique go kart", they used to have advertisements in the old hot rod magazines. Or google Captain Jack McClure
In his 90's, Captain Jack ran something like a 4.7 eighth at 136 mph, not that long ago.
As far as the tires, I suppose you could use Burris, Vega, Bridgestone, or about any sprint type kart tire. Sprint tires are usually 5", right?
Heights are around 11" to 11.5", and you'd have your choice of 6", 6.5", 7", or 8" for width. Well, you used to be able to get 6.5's. I'm sure someone has them
You might need to call around
Last edited: Jul 6, 2019

Thanks Bob, I have tried a few of those but not all, so thanks for provided a few more possible sources.

Just a bit of trivia, (mine is built around a Rupp body) is obviously not a turbonique motor, there were a number of karts using two of them, increasing the murphy's law factor in even more. in fact I've yet to see it anywhere else, the deal was that there was another problem, in that the driver in the beginning of his run would find himself starting to steer or the machine going away from a straight line and instinctively back off of the throttle, correct his course and then get back on the throttle. bad idea, including some funny cars and top fuel dragsters of even today. what would happen is that the rocket fuels mixtures would then be introduced back into the ombustion chamber, lite off and BOOM! Liquid fueled rocket engines were not designed for that kind of scenario... fuel shut off suddenly, then turned back on suddenly. It does not happen on space vehicles nor rocket karts. The experienced driver simply shut down the run/motor if he had to back off the throttle and coasted the rest of the run, refueled and tried again if allowed another try. Since then, some rocket karts began to sneak back onto the track, such as the one you described (he was like near 90 years old at the time, there are vids of it on youtube, but not for any points or sanctioned events... and it was usually done after hours. Nearly all of these karts left over from this period, all 2 or 3 of them, are now either destroyed or in museums, altho there are those souls who have constructed their own as a project or hobby.

Thanks again for the information a lot! 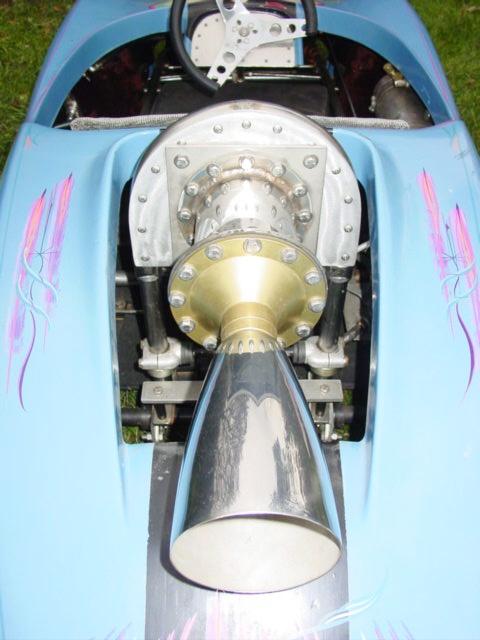 https://www.ebay.com/itm/Vintage-Chevrolet-Corvette-Orange-Fiberglass-Rupp-Go-Kart-Body/153502049888
this was the same kind of body that mine was built around, with a few modifications to the body and still then have to actually make the chassis/frame to fit inside of it, obtain and install the engines, tanks and fuel and about a thousand other things. interesting that these are still floating around.

I watch one run at Bristol around 1971 It did not have body, It was insane.
C

Try http://vintagespeedtires.com/ alot of the vintage guys with karts from that time period use them.

Mike- Wasn't it Wile E. Coyote? Or would there be copyright problems with that?

I'm just guessing here, but I'd imagine that Mike would want new tires,
He could call Burris
https://www.facebook.com/BurrisRacingUSA/Or TS Racing
http://www.tsracing.com/Or Comet Kart Supply
https://cometkartsales.com/home.php
Or Maxxis at GoldSpeed
https://maxxiskartracing.com/
It would be best to talk to them in person because it's hard telling what these guys have in the back room.
4

Bob Evans said:
Mike- Wasn't it Wile E. Coyote? Or would there be copyright problems with that?

I'm just guessing here, but I'd imagine that Mike would want new tires,
He could call Burris
https://www.facebook.com/BurrisRacingUSA/Or TS Racing
http://www.tsracing.com/Or Comet Kart Supply
https://cometkartsales.com/home.php
Or Maxxis at GoldSpeed
https://maxxiskartracing.com/
It would be best to talk to them in person because it's hard telling what these guys have in the back room.
Click to expand...

Yes Bob, it is Wile E. Coyote, however, Warners Bros. owns the trademark to that name. I did not wish to raise the ire of their attorneys regarding any such legal issues, at the least not use that name in the title, which would be a slap in their faces and I want friends there, not enemies. Take a look at the script if you like and see what you think. It does not have to be MY script, they can write their own, my point is that after Ironman 8 or Batman 14 or Transformers 8 and the dozens of other movies and sequels from classic cartoon series and tv series, they could make the FIRST Wile E. Coyote /Roadrunner movie IN LIVE ACTION LIKE ALL OF THE OTHER REMAKES and do very, very well. I was encouraged when I read that Warner Bros. was going to make a movie in the near future "Wile E. Coyote vs. ACME", and thought great, finally, until I read that it was just going to be ANOTHER CARTOON MOVIE, NOT LIVE ACTION (like mine is).

Back on topic tho, thank you for the tire references, between everyone I am sure I will find a suituable pair. I have already found a pair that size which is only 1/4" difference in width from the specific sizes I need, they will work fine, being split rims I will also need tubes, nothing to be concerned about... thanks everyone... mike 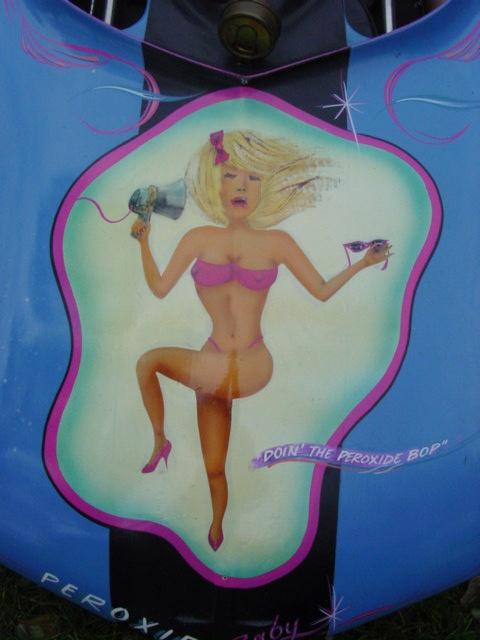 One Fast Kat said:
I watch one run at Bristol around 1971 It did not have body, It was insane.
Click to expand...

You are correct, most of them were open karts, no body, plus the driver was almost always in a near lay-down position.

I got a pretty good guess as to why the rear tires blew... they were often used on riding lawnmowers and golf karts, which rarely get up to those speeds. I think a pair of these were on the back and it didn't take long to ker-blewey. also having difficulty finding out about compounds... yds/ ylc, drifting tires, etc.
4

tks csg94, so far they come the closest as far as size, but at 25 psi, they seem to be for sliding karts, I don't know, the sidewalls on mine say 8 psi because they are meant to stick. maybe it does not matter, as those turbonique motors were connected to the shaft, while mine is a free running machine. I will make a few calls or just pick up the one on ebay and hope another comes along sometime, at least they are the right size and type and problably the compound also, as they are called "vintage" racing slicks. thanks to all... mike

Get rid of those split rims and inner tubes. Go one piece tubeless wheels and tires
4